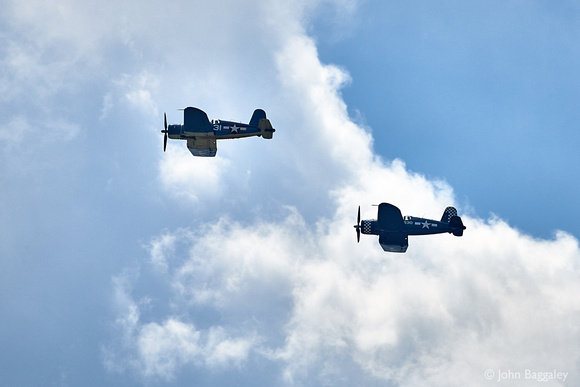 A pair of Vought F4U Corsair fly in formation as part of the Arsenal of Democracy Flyover, which occurred over Washington, DC, on May 8, 2015. These planes flew as part of the thirteenth formation of the flyover, the "Iwo Jima" formation. According to the Washington Post, "The gull-winged Corsair was the first U.S. fighter to exceed 400 mph in level flight. Late to enter carrier service because of landing gear problems, it became famous flying from island bases in the Pacific with such squadrons as the Black Sheep Squadron led by Marine Corps ace Gregory 'Pappy' Boyington. The Japanese called it 'Whistling Death,' and it served through World War II and the Korean War. It served in Central American air forces until the early 1970s.", May 7, 2015.