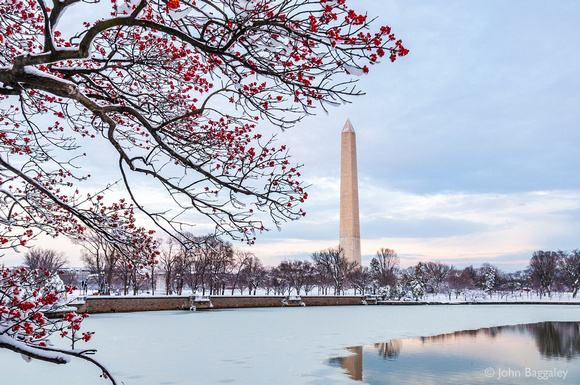 Sunset on a snowy Washington Monument

Each of the three major snowstorms had a nickname. The first was the Snopocalypse, which dumped about 14 inches of snow on the Capitol, just days before Christmas. The second, in February, was the Snowmageddon, with 8 to 20 inches. Snoverkill occurred only days later, dropping another 14 inches on the Capitol.

The Snowmageddon and Snoverkill shut down the Capitol completely. No cars could travel on the roads, the metro shut down, and restaurants and stores closed. The city became quiet... and beautiful.

In this image of the Washington Monument taken from a bridge over the Tidal Basin during the Snowmageddon, the storm has just broken, the snow has stopped falling, the clouds are parting, and the sun is beginning to set.