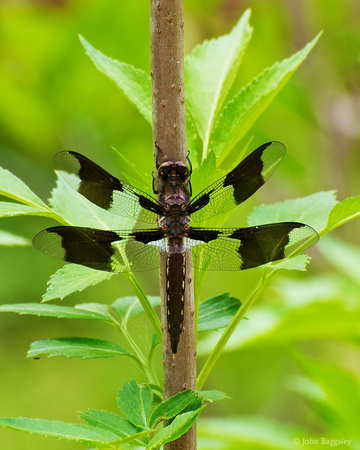 Close-up of a adolescent dragonfly near Great Falls, Maryland. The dragonfly is a Common Whitetail (female) - Libellula lydia.

From Wikipedia: The Common Whitetail or Long-tailed Skimmer (Libellula lydia) is a common dragonfly across much of North America, with a striking and unusual appearance. The male's chunky white body (about 5 cm long), combined with the brownish-black bands on its otherwise translucent wings, give it a checkered look. Females have a brown body and a different pattern of wing spots, closely resembling that of female Libellula pulchella, the Twelve-spotted Skimmer. Whitetail females can be distinguished by their smaller size, shorter bodies, and white zigzag abdominal stripes; L. puchella's abdominal stripes are straight and yellow.
© 2010 John Baggaley. All rights reserved.
User Agreement
Cancel
Continue